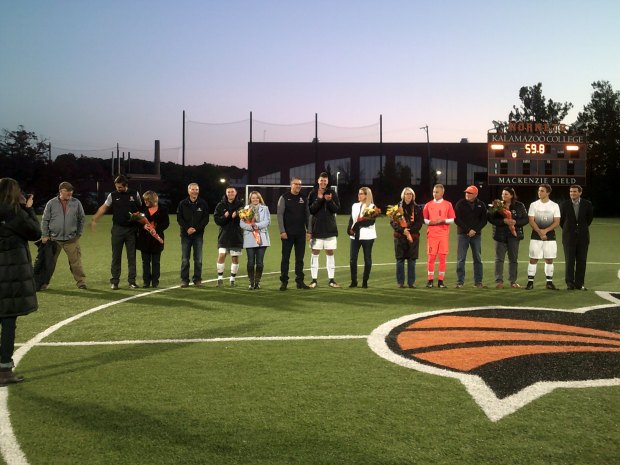 Albion College defeated Kalamazoo College 2-0 Wednesday night in men’s soccer, splitting their season series for the second straight season with the road team winning once again.  The Britons got the first goal on a missile by Christian Hurtado with 11:09 remaining in the first half.   The second goal came with 18:14 remaining in the second from Erik VanFossen.

Kalamazoo falls to 8-7-2 overall and 7-5-1 in the MIAA.   The Hornet men and women end their regular season Saturday afternoon at Olivet.   Albion moves to 6-7-4, with each win on the road, and 3-7-3 in MIAA play.  They end their year Saturday night at top-ranked Calvin.

You can watch Wednesday’s game here. 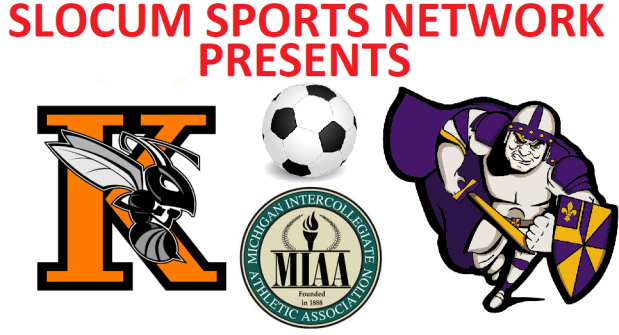 Wednesday evening at 7 p.m., the Kalamazoo College men’s soccer team is holding their senior night as they battle Albion College in their home finale.   You can watch the contest live via Kalamazoo College’s Livestream and also listen to the match via the Slocum Sports Network.

Kalamazoo enters the contest at 8-6-2 overall and 7-4-1 in MIAA play, third-best in the league standings.  The Hornets are coming off a tight 1-0 home loss to unbeaten and Division 3 #1 ranked Calvin on Saturday.   Kalamazoo holds a 5-2-0 record at Mackenzie Field.

Tuesday was a winning night for the Kalamazoo College soccer programs at Mackenzie Field, as both the men and women earned wins over MIAA foes.   The Hornet women won the first contest 3-2 over Calvin College, followed by a 3-1 men’s victory over Olivet College.

In the women’s game, the Hornets scored first, but found themselves down 2-1 at half.   Libby Munoz scored all three Kalamazoo goals, including the game winner with under three minutes remaining.    Watch the winning goal here.

In the men’s game, two goals in the final seven minutes of the first half put the Hornets ahead over Olivet.  The Comets started the second with a quick goal, but Kalamazoo matched it about three minutes later.   Jacob Pink scored twice for the Hornets, both on penalty kicks set up due to hand-balls in the box.

You can re-watch both games below:
WOMEN
MEN

Catch both games Tuesday online via the Slocum Sports Network and via the Kalamazoo College Livestream.

The Trine Thunder swept the Kalamazoo Hornets Wednesday, 25-20, 25-23, 25-12.   Trine led the entire first set and nearly the entire third set.   Kalamazoo was ahead for much of the second and Trine didn’t get a two-point lead until the very end.

Shannon Scott and Emma Gaff led the Thunder with 11 kills each.  Kalamazoo’s Madi Goodman also tallied 11, six of which came in the second set.   The win moves Trine to 8-6 overall and 4-3 in MIAA play, while Kalamazoo falls to 0-7 in the MIAA and 2-12 overall.   Trine returns to action at home against league-leader Calvin Tuesday, while Kalamazoo travels to Grace Bible College Saturday.

You can watch Wednesday’s match in full here.  LIVESTREAM

Listen live online Wednesday at 7 p.m. on the Slocum Sports Network as the Kalamazoo College Hornets host the Trine Thunder in volleyball.   It’s the seventh MIAA match of the season for both squads and their first volleyball meeting of 2017.   They split their 2016 meetings, with both home teams earning a win.

Kalamazoo is still searching for its first league win, sitting at 0-6 in the MIAA.  The Hornets are 2-11 overall, getting both wins in their Hornet Invitational tournament two weekends ago.  Trine is currently tied for fourth in the MIAA at 3-3 and sits at 7-6 overall.

Listen to Wednesday’s match on the Slocum Sports Network with first serve scheduled for 7 p.m. from the Anderson Athletic Center in Kalamazoo.   The game can also be seen via Kalamazoo College’s Livestream.

It appeared that Kalamazoo College and Hope College were headed to overtime Thursday evening, but a goal by sophomore forward Libby Munoz with 32.6 seconds remaining gave Kalamazoo a 1-0 victory.     Watch the goal here.

Kalamazoo returns to action at Trine Sunday.   Hope hosts Calvin Saturday.     The full broadcast from Thursday can be seen here. 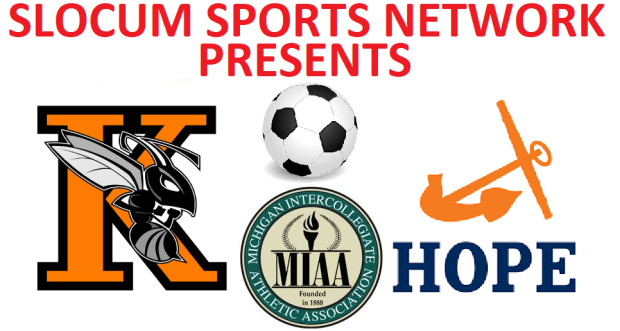 Thursday evening at 7 p.m., the Kalamazoo College Hornets and Hope College Flying Dutch meet for the first time in 2017 in women’s soccer.  Both finished at 12-2-2 last season in MIAA play, splitting the regular season crown.   Kalamazoo had the edge head to head, defeating Hope 1-0 in Holland, along with a 1-1 draw in their last meeting at Mackenzie Field.    Hope ended up with the MIAA tournament crown, defeating Alma in the final after Alma won in penalty kicks over Kalamazoo in the semifinal.

Thursday’s contest can be heard online via the Slocum Sports Network and also seen and heard via the Kalamazoo College Livestream.   Kickoff is set for 7 p.m.

Kalamazoo took the first set and led for much of the second, although Adrian narrowly took it in the end.   The Bulldogs finished the third on a 5-1 run and carried that momentum through as they controlled the fourth set throughout.   Maria Katrantzi and Vanessa Vigier each had 11 kills for the Hornets, with Alex Tobler scoring 11 for Adrian.

Adrian moves to 1-4 overall and 1-0 in the MIAA, while Kalamazoo drops to 0-5 and 0-1.    The Hornets travel to St. Mary’s Friday, then host Alma Saturday.   Adrian hosts #1 ranked Calvin Friday and hosts Hope Saturday. 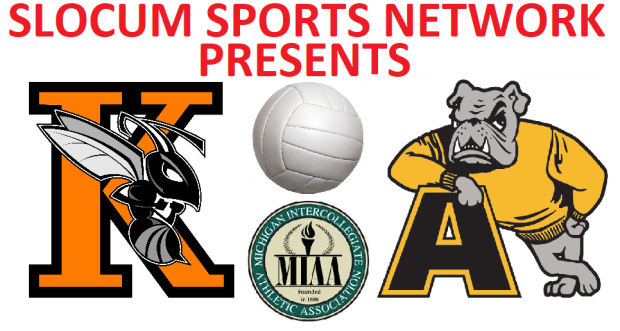 Listen live online Wednesday at 7 p.m. on the Slocum Sports Network to college volleyball as the Kalamazoo Hornets host the Adrian Bulldogs.   It’s the first MIAA match of 2017 for both squads and both are looking for their first overall victory of the season.

Both teams opened and went 0-4 over the weekend in the Bluffton, Ohio Spiketactular.   Kalamazoo finished 9-19 overall in 2016, improving from a 2-24 overall mark in 2015.  Adrian was 15-14 last season, finishing fourth in the MIAA and making the league tournament off a 9-7 conference mark.

Adrian narrowly won their most recent meeting, surviving at home in five sets on October 21st, 2016.  In their earlier 2016 meeting in Kalamazoo, Adrian swept the Hornets.    The Bulldogs have won four consecutive meetings over Kalamazoo, with the Hornets winning last at home on October 22, 2014.

Listen live online to Wednesday’s match on the Slocum Sports Network with first serve set for 7 p.m. from Anderson Athletic Center in Kalamazoo.