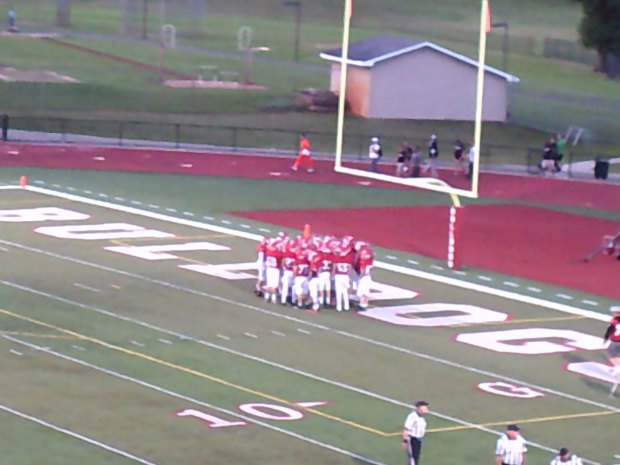 Vicksburg scored first, traveling 62 yards on their opening drive for a 20-yard Caleb Welch touchdown run.  After trading punts, Vicksburg got a fumble recovery by Austin Bresnahan at their own 26-yard line.   The Bulldogs would punt again and Dowagiac’s Caleb Murphy would take the punt to the end zone from 72 yards out with two seconds remaining in the first quarter, tying the game at 7-7.

Dowagiac claimed the lead for the first time midway through the second as Murphy intercepted Garrett Ketelaar and went 32 yards to the house.  Vicksburg responded on the following drive and evened the game at 14-14 with a 28-yard touchdown pass from Ketelaar to Ryan Morgan.

Dowagiac punted, but got the ball back with 55 seconds left off a pick from Andrew McIntosh.   They used 51 seconds to go 74 yards, grabbing a 21-14 lead into halftime off a 27-yard touchdown pass from Brenden Dudley to Jamin Hunt.  The Chieftains also started the third quarter with the ball, but Vicksburg’s defense forced a three-and-out.

A 10-play, four-and-a-half minute drive culminated in a 32-yard Joe Brady field goal, putting Vicksburg within four, 21-17.   The next Dowagiac drive went 65 yards, with 51 yards and a six-yard touchdown run coming from Murphy.   The extra point was blocked, putting the score at 27-17 with 4:10 remaining in the third.

After trading punts, Vicksburg got back within three, thanks to a 34-yard touchdown pass from Ketelaar to Adam Henderson with 10:38 left.  The Bulldog D forced another punt and with 8:13 remaining, DJ Bullock blocked Dudley’s punt, setting up a four-yard touchdown recovery for Shane Earl and a 31-27 Vicksburg lead.

Vicksburg forced another three-and-out, then punched into the end zone on a three-yard Ketelaar rush, which put him over 200 yards on the ground, with 5:01 on the clock for a 38-27 advantage.  Dowagiac’s last drive ended in a turnover on downs, allowing the Bulldogs to drain the clock shortly after.

Unofficially, Ketelaar finished with 219 rushing yards on 31 attempts with one rushing touchdown, along with 79 pass yards and two scores.  Dudley had 125 passing yards, going 11-24.

Next Thursday, Vicksburg travels to Allegan.   Dowagiac has their home opener Thursday against Three Rivers.   Listen back to Thursday’s game below: 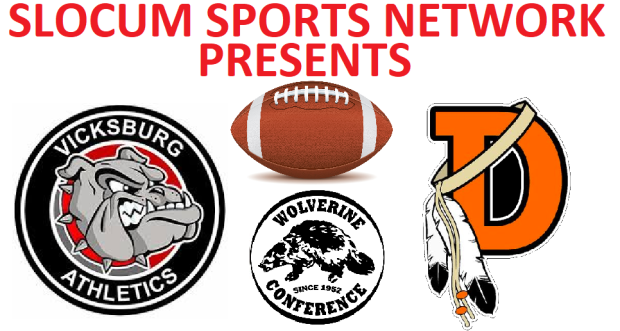 Listen live online Thursday night on the Slocum Sports Network as the Vicksburg Bulldogs host the Dowagiac Chieftains to begin the 2017 Michigan high school football season.   The last two seasons, both schools made the postseason and finished in the top half of the Wolverine Conference.

Last season, Vicksburg finished 7-2 in the Wolverine Conference, behind only league-champ Edwardsburg (9-0) and even with Three Rivers.  The Bulldogs entered the postseason for the third consecutive year, but fell in the Pre-District round to Chelsea 37-7, putting them at 7-3 for the season on the field.   However, because of the use of an ineligible player, Vicksburg later had to forfeit wins gathered in weeks 3-8,  for an official record of 1-9.

Vicksburg had eight players earn all-conference honors last season, six of those players have graduated.   Back for their senior campaigns are Austin Povlock and DJ Bullock, both of which received second-team honors on the defensive line.

Dowagiac finished 6-3, fourth in the Wolverine Conference standings last season.   The Chieftains got a first round playoff victory over Buchanan 28-25, but lost 14-7 to Berrien Springs in the District final for a 7-4 overall mark.   Like Vicksburg, Dowagiac had eight players with all-conference honors last season and only return two.   Back are Caleb Murphy (first-team wide receiver) and Brenden Dudley (second-team punter).

Vicksburg won last season’s opener at Dowagiac 17-7.   Two seasons ago, the Bulldogs dominated the Chieftains for a 35-0 win.  Despite the recent success, Vicksburg is 4-9 all-time against Dowagiac, according to Michigan-Football.com.

Listen live to Thursday’s opener on the Slocum Sports Network with kickoff set for 7 p.m. from Vicksburg High School.