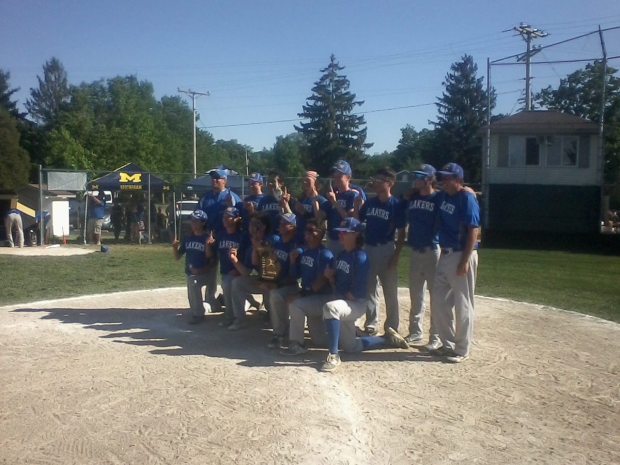 The sixth-ranked Lake Michigan Catholic Lakers advanced to the Division 4 MHSAA baseball quarterfinals with a pair of 5-3 victories Saturday over top-five ranked opponents.   The Lakers defeated fourth-ranked Hackett Catholic in the semifinal, then topped fifth-ranked Centreville in the final.  The Bulldogs had advanced after a 6-3 win over the hosting Decatur Raiders.

In the championship, the Lakers scored in the first inning, but fell behind after two in the second and one in the third from Centreville.   Two from LMC in the bottom of the third put the game at 3-3, which it stayed at until the bottom of the sixth inning.  Freshman Matthew DeFay had a one-out single, followed by an RBI triple from Zach Rogers.   He would score on an error for extra cushion.

Andrew Kangas was solid in relief for the Lakers.   He pitched the final five innings, allowing four hits, one run, two walks, and three strikeouts.  DeFay had two runs on three hits, Rogers had two hits, two runs, and an RBI, and Jake Kissane brought in three on two hits.  Alex Meyer started for Centreville, allowing three runs on seven hits in four innings.   The win avenges a Regional semifinal loss to Centreville from last season for LMC.

In their earlier win over Hackett, LMC initially trailed thanks to a three-run first inning for the Irish.  Aided by fielding woes, the Lakers put up single runs in the first, second, and third to tie the game.   Like against Centreville, the sixth inning is where they broke through, using a walk, double, and single to plate two runs.  DeFay pitched 6.1 innings, allowing five hits, three runs, one earned, with three walks and six strikeouts.
In the first game of the day, Decatur started up with a first-inning run against Centreville.   The Bulldogs matched in the second, with the Raiders adding two in the third.   The Bulldogs again matched one inning later, then jumped ahead with one in the fifth and two in the sixth.  Coletin Gascho pitched a complete game, allowing four hits, three runs, one earned, with two walks and six strikeouts.

Centreville ends the year at 19-3, with Hackett finishing 25-5 and Decatur at 16-16.   Lake Michigan Catholic improves to 28-5 and meets Hudson Tuesday in the quarterfinal at 5 p.m. from Bailey Park in Battle Creek.

Listen back to Saturday’s Regional games below:

Listen live online Saturday on Michigan Sports Radio and the Slocum Sports Network to the Regional 29 baseball tournament from Decatur High School.   The action begins at 10 a.m. with the hosting Decatur Raiders facing the fifth-ranked Centreville Bulldogs.   At noon, the fourth-ranked Hackett Catholic Irish play the sixth-ranked Lake Michigan Catholic Lakers.  The winners meet at 2 p.m. with a trip to the quarterfinals on the line.

Centreville is the defending Regional champion and was the Division 4 runner-up two seasons ago.  They defeated the other three on their way to last season’s final four appearance.  They topped Hackett 4-2 in the District final, edged LMC 3-2 in the Regional semifinal and blanked Decatur 8-0 in the Regional final.   The Bulldogs are 18-2 this season, having defeated Howardsville and Marcellus in district 115.

Decatur was the Division 3 runner up in 2014, but the Raiders have been stopped by Centreville the last two years.  At 16-15 overall, Decatur dropped 17th-ranked and District 113 host Lawrence 6-4 and outraced Holland Calvary 19-9.   Despite the weakest overall record, having home-field advantage and a four-time state champion coach in Ben Botti makes the Raiders a significant threat.

Hackett Catholic is the highest-ranked by the final coaches poll, fresh off wins over Kalamazoo Christian and Bellevue for their first district crown since 1988.   The Irish are 25-4 overall and are hoping to have their deepest playoff run ever in baseball.   Last season, they set a school-record with 28 wins.

Lake Michigan Catholic is into the Regional round for the fourth consecutive year, although they haven’t advanced beyond Regionals in this stretch.   Their deepest run came with a runner-up finish in 2010.  At 26-5, the Lakers pounded New Buffalo and River Valley in the district tournament.

Listen live to all three games Saturday online via the Slocum Sports Network and Michigan Sports Radio.   Game one is at 10 a.m. between Decatur and Centreville, followed by Hackett and LMC at noon and the final around 2 p.m.