The Marshall Redhawks grabbed a non-conference home win Saturday afternoon, defeating the Allegan Tigers 4-1.   After a fairly even first 20 minutes, the Redhawks (ranked seventh in Division 2) took control and dominated possession and opportunities the rest of the match.

Sophomore forward Jake Lyon scored the game’s first goal in the 22nd minute for Marshall.  About five minutes later, junior midfielder Carter Peek found the back of the net, giving Marshall a 2-0 halftime advantage.  In the 49th minute, Reed Shivley pushed the lead to 3-0.  Allegan’s lone score came from senior forward Jake Orr in the 74th minute.  Three minutes later, Lyon struck again for his second of the game and sixth of the season, pushing Marshall to the 4-1 final.

The Redhawks improve to 13-2-0 overall with Allegan dropping to 5-5-1.   Both have league matches ahead; Marshall hosts Hastings Tuesday and travels to Jackson Northwest Thursday for Interstate 8 play.   Allegan heads to Plainwell Monday and Sturgis Wednesday for Wolverine Conference action.

Listen back to Saturday’s game below:

Listen live online Saturday around 11:30 a.m. on the Slocum Sports Network as the Marshall Redhawks host the Allegan Tigers in boys soccer.   When these Division 2 squads met last season, the Redhawks were a 3-1 road victor.   Their last meeting in Marshall back in 2015 was a 1-1 draw.

Marshall was ranked seventh best in Division 2 in the latest coaches poll.   The Redhawks are 12-2-0 with their only losses coming to ninth-ranked Haslett and Sturgis, both in 1-0 games.  Marshall is also a perfect 4-0-0 against Interstate 8 Conference opponents.    Meanwhile, Allegan sits at 5-4-1 on the season.   They’re 2-1-0 against Wolverine Conference foes, defeating Dowagiac and Vicksburg, while losing to Edwardsburg.

Listen live to Saturday’s match online on the Slocum Sports Network.   Kickoff is scheduled for around 11:30 a.m., pending the earlier JV game. 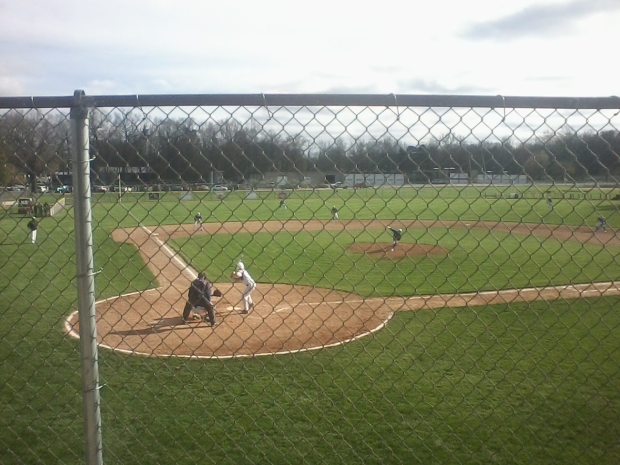 The Plainwell Trojans earned two shutout road victories Friday over the Allegan Tigers, winning 13-0 in six innings and 10-0 in seven.  The star of the afternoon was Trojan senior Hunter Nielsen, who threw a no-hitter in the first contest and hit two home runs in the second.

The future Kellogg Community College Bruin walked his first batter with only an error and another walk leading to Allegan baserunners the rest of game one.  Nielsen finished with 11 strikeouts against 20 batters faced.  The game remained tight through four innings with the only score coming in the third on an RBI double by Nielsen, scoring Isaac Davis.   The bats came alive with five runs on four hits and three errors in the fifth, followed by seven runs on seven hits in the sixth.  Notable performances came from Cole VanGoeye (three hits, two RBI), Davis (two hits, two runs, one RBI) and TJ Opel (three hits, one run, one RBI).

In the second game, Plainwell plated solo runs in the second, third, fifth, and seventh innings.   The runs in the fifth and seventh came from solo bombs by Nielsen, capping off a career day.    The big Trojan inning was a six-run sixth.  Ryan Topp ended with three hits, two RBI, and one run.  Quietly, Evan Salinas also pitched a complete game shutout, giving up only three hits and two walks with six strikeouts over seven innings.

Allegan falls to 2-9 overall and 0-4 in Wolverine Conference play and return to action Saturday morning at 10 against Battle Creek Lakeview.  Plainwell moves to 5-3 and 4-0 in league play with a conference showdown at home Tuesday against nearby rival Otsego.

Listen back to both of Friday’s games below:

Listen live Friday afternoon at 4 p.m. on the Slocum Sports Network as the Allegan Tigers host the Plainwell Trojans in a high school baseball doubleheader.   For both squads, it will be their second Wolverine Conference series of the season.

Allegan enters at 2-7, having fallen to conference foe Otsego last week.  Most recently, they dropped games Wednesday 3-0 and 11-5 at Coloma.  After seven consecutive road games, the Tigers meet Plainwell, who won last season’s meetings 5-2 and 14-1.   The Trojans are 3-3 overall, taking their lone conference series last week over South Haven.   On Wednesday, Plainwell split 9-2 and 9-5 at Parchment.

Listen live to Friday’s games on the Slocum Sports Network with the action set to start at 4 p.m.