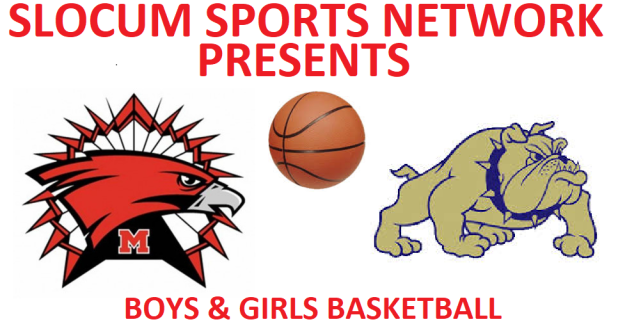 Listen live Thursday evening on the Slocum Sports Network to boys and girls varsity basketball between the Marshall Redhawks and Otsego Bulldogs.  The girls varsity is set for around 6 p.m. with the boys around 7:30 p.m.  It’s the third consecutive season that these schools will be meeting in late December.

The Otsego girls enter Thursday at 5-2, scoring 51.8 points per game and allowing 35.1.   Marshall is only 2-4, but they’ve had an incredibly strong schedule with a combined record at 34-3.  The Redhawks have scored 35.5 points per game and allowed 41.6 thus far.   Marshall is 4-0 against Otsego over the last two seasons, winning both regular season meetings and two Regional semifinal games.

Listen live to Thursday’s games online on the Slocum Sports Network.   The girls as set for around 6 p.m. with the boys around 7:30 p.m.