Portage Central grabbed a varsity basketball sweep in their final action before the holiday break Thursday, defeating Paw Paw 59-44 in boys play and 56-27 in the girls game.   In the boys contest, a 14-point fourth quarter from junior Jason Mih allowed the Mustangs to pull ahead after a back-and-forth affair.   In the girls game, a 25-2 second quarter put the game out of reach. 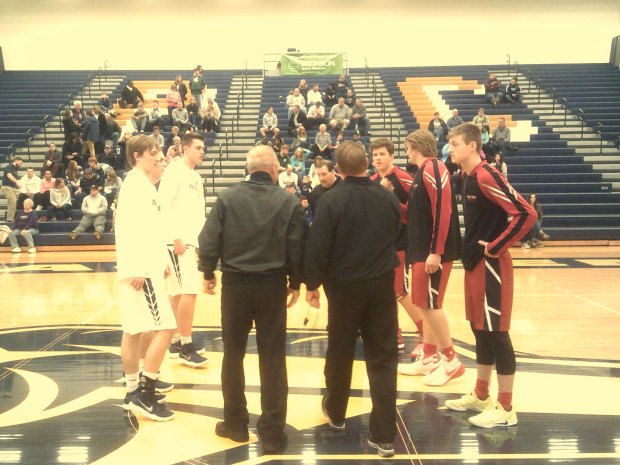 The team captains meet with the officials before the game.

Paw Paw hit the opening basket in the boys game and had their biggest lead of the game at the end of the first quarter, up 13-6.   They stayed ahead until three minutes were left in the second quarter.   After trading the lead, Portage Central tied the game at 25 going into the half with a no-look Griffin Baker pass setting up a triple from Zach Bumgarner.

The game stayed within two possessions for the entire third quarter, with PC holding a 38-34 advantage heading into the fourth.    Then, Jason Mih came alive and delivered a 14-point quarter, including four consecutive threes, to gave Portage Central the final edge.

Mih finished with a team-high 20 points.  Paw Paw’s Luke Toliver posted 25 points.    The Portage Central boys improve to 3-1 with the victory and are off until January 9 at home against Lakeview.   Paw Paw falls to 2-2 and hosts South Haven Friday night. 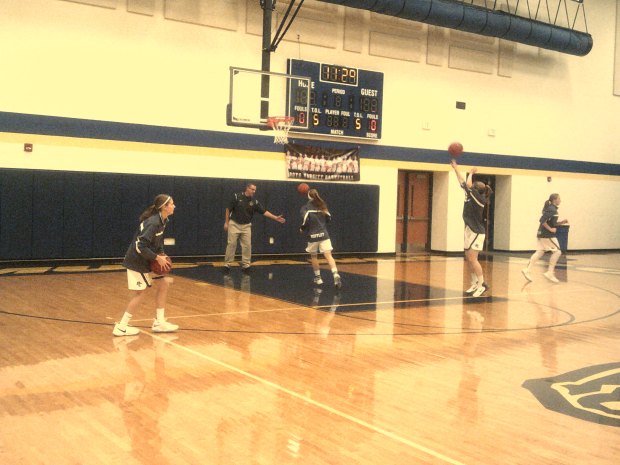 Neither team had a decisive advantage in the first quarter of the girls game, as Portage Central led 10-7 after one.   The Mustangs were dominant in the second and third quarters, outscoring Paw Paw 35-2.   Although Paw Paw won the fourth quarter 18-11, the hole was far too deep to climb out of.

Kayla Mathieu and Abby Long each scored 19 points for the Mustangs.   Paw Paw got 14 points from Kiarra Herson.   Portage Central moves to 4-2 and travels to Lakeview on January 9 for their next game.   Paw Paw drops to 1-5 and hosts South Haven Friday.

Listen back to Thursday’s games below: