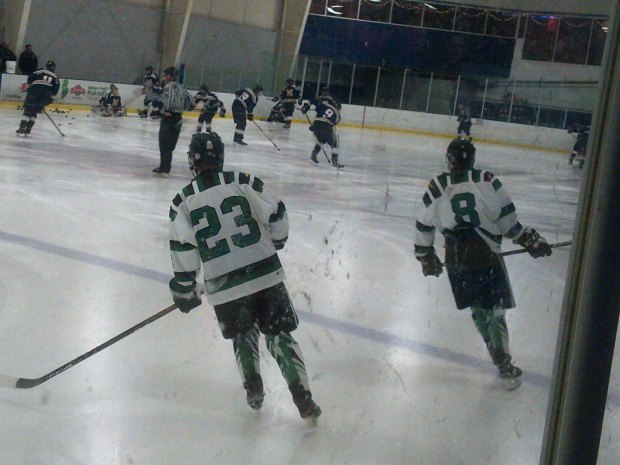 The Blades of Southwest Michigan defeated Mattawan 4-3 in the final minute of overtime and Portage Northern topped the Kalamazoo Eagles 7-5 in Wednesday’s SWMHSHL doubleheader at Wings West.   The Blades’ victory snapped at least a 16-game, six-season losing streak to Mattawan, based on the SWMHSHL website’s scores dating back to the 2011-12 season.    Team captain Alex Ploehn had the game winner on a five-on-three powerplay with 33 seconds remaining.

The Blades scored their first goal within the first two minutes from Parker Lawrence, but Mattawan would respond three minutes later with a Sam Puzevic goal.  Midway through the period, the Blades earned two quick minor penalties, allowing for a Jason Moreau powerplay goal and a 2-1 Wildcat lead.   The score stayed 2-1 through the second period, despite the Blades getting four chances at the powerplay.

With 10:41 remaining in the third period, Mattawan took a 3-1 lead on a Zach Wiggins score.   Less than a minute later, Blaine Shafer matched it for the Blades.   The Wildcats picked up another penalty shortly thereafter and on their fifth powerplay of the game, Ploehn scored with 7:23 to go.

The game went to overtime tied at 3-3.  The penalty bug would bite Mattawan again, picking up a major and minor about a minute apart, giving the Blades a five-on-three for the final part of the extra period.   Once again, the senior team captain from Lakeview Ploehn found the back of the net.

Ploehn finished with three points, also getting an assist.  Mattawan’s Wiggins also had three points with his goal and two assists.  Blade goalie Zac Hattan was credited with 26 saves, Mattawan’s Shaffer Moore had 27.   The Blades improve to 7-1-0 overall and 2-0-0 within SWMHSHL play.  Mattawan falls to 2-4-1 overall and 2-1-0 in the league.

In the other game, the Eagles struck first on a Jimmy Wressel goal only 76 seconds into the game.  Portage Northern’s Will Todd responded just over a minute later to even things.  Griffin McLeod and Quentin Roseboom both found the back of the net to put the Huskies up 3-1 at the first intermission.

Dylan Ruggles made it a three-goal game early in the second, followed by Roseboom’s second goal midway through the frame, this one on the powerplay, for a 5-1 Husky advantage.  However, the Eagles scored thrice in the final 5:10 of the second on goals by Zachary Pernie, Wressel, and Colin Mehren, putting the score at 5-4.

Portage Northern added more cushion with quick third period goals from Grant Ernst and Connor Sorge.    Wressel earned a hat-trick on a powerplay goal with 9:36 remaining, but the Eagles couldn’t get any closer than the 7-5 final.   Connor Sorge had three points, adding two assists to his goal.   Wressel added one assist to his hat-trick, Mehren also had four points with three assists.   Portage Northern improves to 1-1-0 in SWMHSHL play and 2-5-0 overall, the Eagles fall to 0-3-0 in the league and 1-5-0 overall.

The Huskies play Saline Saturday at 2:25 p.m. from Lawson Ice Arena.   The Eagles meet Portage Central next Wednesday at Wings West.   The Blades head to Indiana over the weekend for the Cornfield Cup at the Culver Academies.   Mattawan hosts Detroit Country Day at Wings West Friday.

Listen back to Wednesday’s games here: