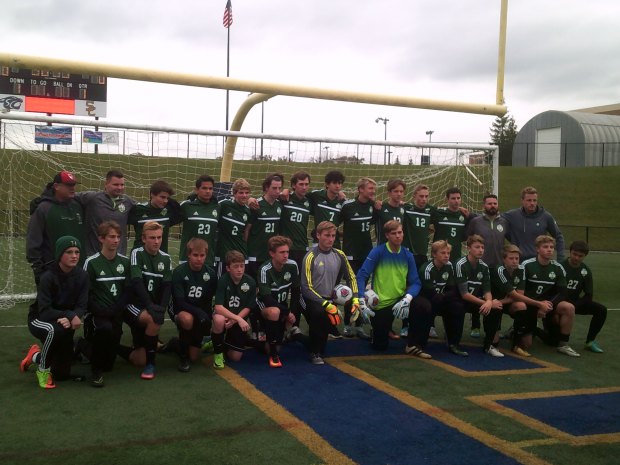 The Greenhills School Gryphons claimed their first state championship in their fourth try Saturday at Stoney Creek High School, defeating the Hackett Catholic Irish 1-0 in the Division 4 final.   For the second time in three seasons, Hackett was denied in the final, putting the program all-time at 4-2 in championship games

The first half was scoreless and pretty even overall between both squads.   Just before the start of the second half, faint thunder prompted a delay and soon after, a full thunderstorm was over Rochester Hills.   After about 90 minutes, the lightning ceased and the players returned to the field with a large rainbow sitting behind the net defended by Hackett in the second half.

Greenhills came out firing in the second half and dominated the possession and controlled the opportunities.  With 23:58 remaining, the Gryphons got the game’s lone goal as a Matthew Pumphrey corner kick found the lower body of Jerry Tucker and bounced into the net.   The Irish finally had a few chances in the final ten minutes, but none could get by goalkeeper Leo Fried, officially credited with four saves on eight shots.   Hackett’s Joe Carr also was credited with four saves.

Greenhills finishes the season at 20-6-1 with Hackett at 19-2-2.   It was the first state title for Gryphons coach Lucian Popescu, who took the team to the final in his 2010 debut season.   The future is bright for the Irish, as they’ll return nearly all of their scoring from a team which averaged five goals per game.   Graduating are Carr, along with midfielders Jake Wurtz and Jackson Bradshaw, and defenders Matthew Sherwood and John Benjamin.

Listen back to the broadcast of the game below: