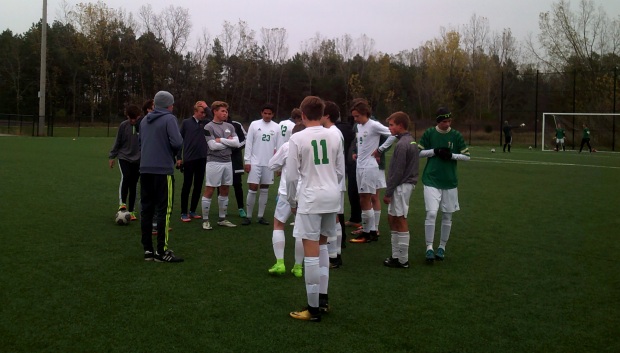 For the second time in three seasons, the Hackett Catholic Irish will be playing for a Division 4 boys soccer state championship.   Hackett defeated the Buckley Bears 3-1 Wednesday at East Kentwood, getting all three goals from junior forward Max Keenan, giving him 44 total on the season.

Hackett brought the pressure immediately and Keenan earned a penalty kick in the fourth minute, putting it to the right on the ground by goalkeeper Joey Weber.  It was the first goal Buckley had allowed in the postseason.  In the 14th minute, Keenan got an assist from Aidan Gillig for the 2-0 Irish advantage.

In the 37th minute, Keenan found his way through three blue shirts to earn the hat-trick for a 3-0 lead at halftime, becoming the first team to score three on a Buckley squad which had allowed only 12 goals in 24 other matches.   Possession remained in favor of Hackett for the rest of the match with Buckley finally getting a goal on a deflection from Denver Cade in the 89th minute.   Unofficially, Irish goalkeeper Joe Carr had four saves with six by Weber for Buckley.

The Bears, eighth in the final Coaches Association poll, finish their program’s strongest ever season with a 20-2-3 record.   The Irish, fourth in the final poll, move to 20-1-3 and will play in the championship for the sixth time in program history.   They will play fifth-ranked Ann Arbor Greenhills, who knocked out two-time defending champion Genesee Christian 2-0.   The Division 4 championship is scheduled for a 3 p.m. kickoff Saturday at Rochester Hills Stoney Creek and can be heard live via the Slocum Sports Network.

Listen back to the semifinal match below: