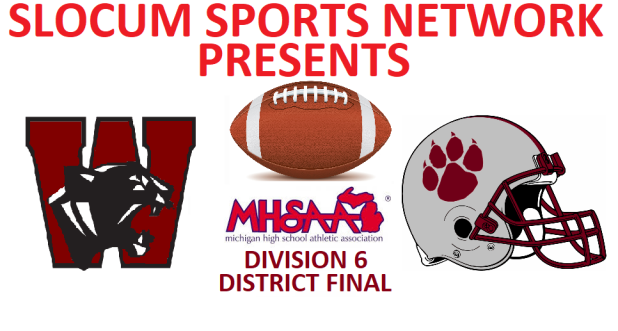 Listen live online Friday night on the Slocum Sports Network to a MHSAA Division 6 District football final between Watervliet and Delton Kellogg.  Both teams are the Panthers, both wear maroon, both are in the SAC Lakeshore division, and both have been hot since their week six meeting.

Back on September 29, Watervliet won at Delton Kellogg 58-44 to lock Watervliet into the playoffs at 6-0 and putting DK in danger at 2-4.   The 14-point margin remains the closest anyone has come this season to beating Watervliet, who is now 10-0.   Since allowing 44 in that game, their worst defensive effort of the year, Watervliet has allowed 52 combined points over their last four games, including their first shutout last week in their playoff opener against Schoolcraft.   On the year, Watervliet is averaging 51.4 points per game while allowing 20.5.

Following the Watervliet loss, Delton Kellogg’s only hope at the postseason required a 3-0 finish against Kalamazoo United, Coloma, and Constantine.   DK did just that, winning 35-32, 23-20, and 40-7, giving them enough playoff points to enter the field at 5-4.   Delton Kellogg then had their most dominant performance yet in last week’s Pre-District win at Parchment, destroying those Panthers 57-0 to move to 6-4 on the year.  DK is averaging 34.1 points per game while allowing 26.9.

Watervliet and Delton Kellogg were tied 30-30 at halftime in their week six encounter, but Watervliet was able to pull away in the second half.  Watervliet quarterback Zack Pickens threw for 398 yards and five touchdowns, while also rushing for three scores and 103 yards.

Watervliet is in the playoffs for the eighth time in nine years, although only twice in that stretch have they won their District final and both times, they were then stopped in the Regional.  Delton Kellogg is in the postseason for the second time in the last three seasons, although they had a 13-year playoff drought prior to 2015.  DK has made it to the Regional round only once ever, back in 1987 and their Parchment win last week was their first playoff victory since 2000 and only third ever playoff victory.

Prior to Watervliet joining the SAC in 2015, these schools had never played in football.   Watervliet has won all three previous meetings.   If Watervliet is victorious, they would host either defending state champion Lumen Christi (8-1) or Michigan Center (9-1) in the Regional final.  If Delton Kellogg wins, they would be on the road.