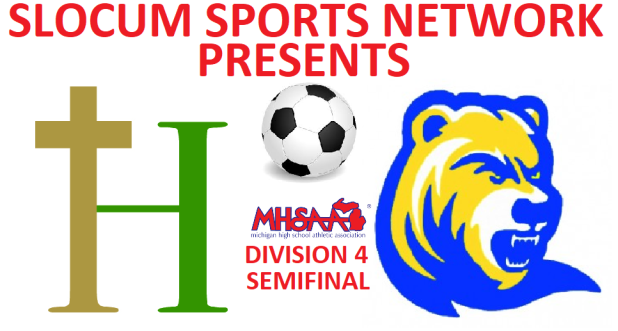 Listen live online Wednesday at 6 p.m. on the Slocum Sports Network as the Hackett Catholic Irish and Buckley Bears meet in a Division 4 soccer state semifinal from East Kentwood.   Hackett is in the final four for the third consecutive season, meanwhile this is the deepest Buckley has ever advanced.

Hackett enters the semifinal with a mark of 19-1-3 and a #4 ranking in the final Division 4 Coaches Association poll.   The Irish are the top-ranked team among those in the final four, averaging just over five goals per game and allowing 24 goals in 23 matches.  They’ve scored multiple goals in all but three of their matches and have gotten three or more in all but five matches.

Hackett outscored their first four postseason opponents a combined 30-2, including a 6-2 district final win over #17 Kalamazoo Christian and a 8-0 destruction of previously unbeaten Howardsville Christian.   The Irish were tested and forced into overtime by #11 Hartford in the Regional final Friday after 80 minutes of scoreless play.  Goalkeeper Joe Carr held for an extra 20 minutes and junior Brennan Creek found the net for a 1-0 victory.

Hackett was knocked out in the semifinal last season in a 4-3 overtime thriller to Muskegon Catholic Central.   In 2015, the Irish made it to the championship for the first time since 1995, but came up short in overtime 3-2 to Genesee Christian.  The Irish have been state champions before, winning four times from 1991-1995.   In recent history, the program has won seven consecutive District championships.

Buckley enters the semifinal at 20-1-3 and a #8 ranking in the final poll.   The Bears have allowed only one goal in their last 12 matches and have allowed only 12 goals total all season, while averaging 3.75 scored per game.   Whereas Hackett has been a yearly soccer power, Buckley’s soccer success is new, with the Bears winning their first ever district crown last season.

The Bears easily dispatched their three district challengers this year, outscoring them 21-0.   Waiting for them in the Regional tournament was the daunting duo of #3 Western Michigan Christian and #2 Leland.   Their lone loss of the year came to Leland 2-1 in the regular season, although the Bears did get the win back 3-0 two weeks later.

Against WMC, Buckley goalkeeper Joey Weber turned away 25 shots on goal to force penalty kicks after 100 scoreless minutes, then made two shootout saves for the Buckley win.     Their Regional final Thursday against Leland had a similar script as Weber made 15 saves to force PKs after 100 scoreless minutes, then made two more shootout saves to punch their ticket to the final four.

Listen live online to Wednesday’s semifinal match on the Slocum Sports Network with kickoff set for 6 p.m. from East Kentwood’s Pat Patterson Field.   The winner meets either #5 Ann Arbor Greenhills or #14 Genesee Christian in the championship Saturday with the time and location to be announced.