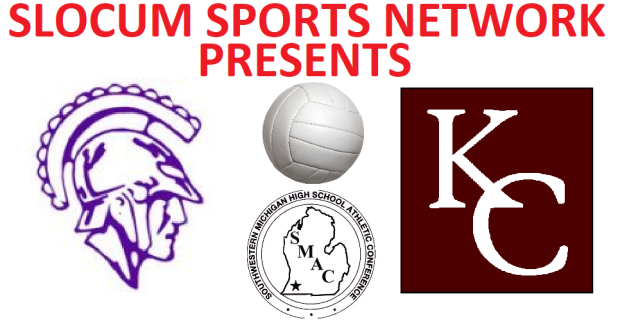 Listen live online Wednesday evening on the Slocum Sports Network to high school volleyball between the Kalamazoo Central Maroon Giants and Lakeview Spartans.   It’s the third match for both squads within a stacked SMAC East division, which also features ranked squads from Mattawan and Gull Lake.

The Maroon Giants are 2-0 in divisional play thus far with wins over Battle Creek Central and Loy Norrix.   Kalamazoo Central enters the week with an overall record of 19-5-1, with the Otsego quad Tuesday ahead of their meeting with the Spartans.    Meanwhile, Lakeview is 1-1 in divisional play with a win over BC Central and a loss to Mattawan.   They’re 24-7 overall and went 4-1 over the weekend in the Richmond invite, falling in the gold bracket final to Class B #1 Notre Dame Prep.

Both meetings last season between the Maroon Giants and Spartans were incredibly tight.   Last October, Lakeview won a five-set match with the first four sets decided by either three or four points.    Earlier in 2016, K-Central won a best of three tournament match over Lakeview with the first two sets both finishing 25-23.

Listen live to Wednesday’s match online on the Slocum Sports Network with first serve scheduled for around 6:30 p.m., pending the earlier JV matches.