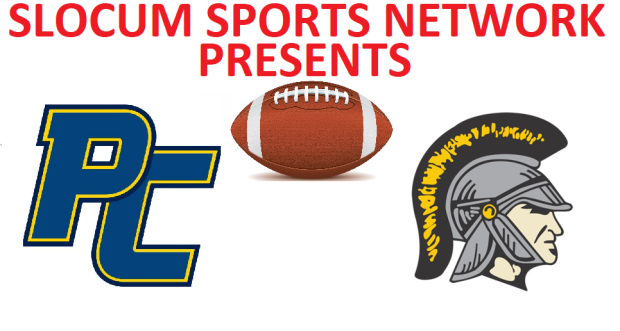 Listen live online Friday evening on the Slocum Sports Network as the Portage Central Mustangs host the Traverse City Central Trojans for week four of the high school football season.   Both teams enter at 2-1, looking to bounce back after suffering their first loss in week three.

Friday’s loser will end a streak of multiple regular seasons with one or zero losses, dating back to 2012 for the Mustangs and 2014 for the Trojans.   It will be the second-ever meeting between the two squads.  Last year, Portage Central made the roughly three hour trip north and fell 38-22.    This year’s meeting also serves as homecoming for Portage Central, who crushed Niles 40-0 for homecoming last year.

The Mustangs started 2017 with wins over Mattawan (27-14) and Battle Creek Central (26-14).   Last week’s trip to Stevensville ended in a 24-7 defeat to Lakeshore.   Traverse City Central rolled Bay City Western (38-0) and Marquette (42-14) to begin the year, but lost a tight one in week three over crosstown and Big North Conference rival Traverse City West, 29-27.

Listen live to Friday’s game online on the Slocum Sports Network with kickoff set for 7 p.m.