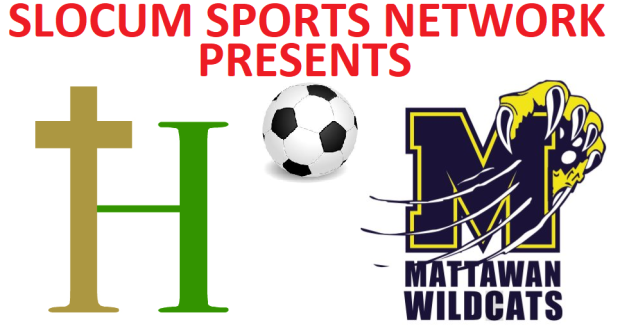 Listen live Monday on the Slocum Sports Network at 6:45 p.m. to a marquee boys soccer match with the Hackett Catholic Irish hosting the Mattawan Wildcats.   The game serves as a big early-season test for both programs, which have advanced to the final four in their division in back-to-back years.

Hackett made it to the Division 4 semifinals in 2016 and was the state runner-up in 2015.   The Irish were 16-5-1 last season and lose First-Team All-State midfielder James Amat and Third-Team keeper Matthew Carpenter.   However, Hackett returns two All-State selections for their junior seasons in Second-Team midfielder Brennan Creek and Third-Team forward Max Keenan.   They also bring back honorable mention defender Jacob Wurtz for his senior campaign.

Mattawan hosted and won against Hackett 3-1 last season.  Although Hackett has given the Wildcats some tight battles, Mattawan has controlled the series with 6-1, 2-1, 2-0, 1-0 victories over the last five years.

Listen live Monday on the Slocum Sports Network with kickoff set for 6:45 p.m. from Mayors’ Riverfront Park in Kalamazoo.