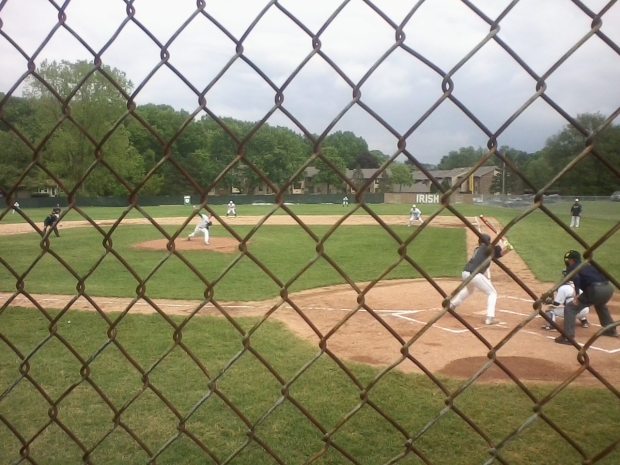 On a Thursday afternoon featuring great pitching and defense, Division 4 fourth-ranked Hackett Catholic won at home over Portage Central, 1-0 in eight innings.  Both starting pitchers kept shutouts through seven innings.   The Mustangs loaded the bases against Adam Wheaton in the first inning, but Wheaton got out of the jam and finished with six hits allowed and 12 strikeouts over seven innings.   Heath Baldwin pitched the final inning clean in relief for the Irish.

Mustang pitcher Austin Hirdning went 7.2 innings, scattering ten hits and one walk with one run allowed.   In the bottom of the eighth, Brenden Warner led off with a single.  After an error and intentional walk loaded the bases, Baldwin lifted the ball deep enough to right field to bring Warner home on a sacrifice fly for the win.

Hackett moves to 23-4 with the victory.   They end the regular season at home in a single game against Gull Lake Tuesday.   Next weekend, they compete in District 116 from Climax-Scotts, which can be heard through Michigan Sports Radio and the Slocum Sports Network.   Portage Central falls to 17-15 with their regular season finale Tuesday at Kalamazoo Christian in a single game.  The Mustangs then host District 9 next weekend.

Listen back to Thursday’s game below: